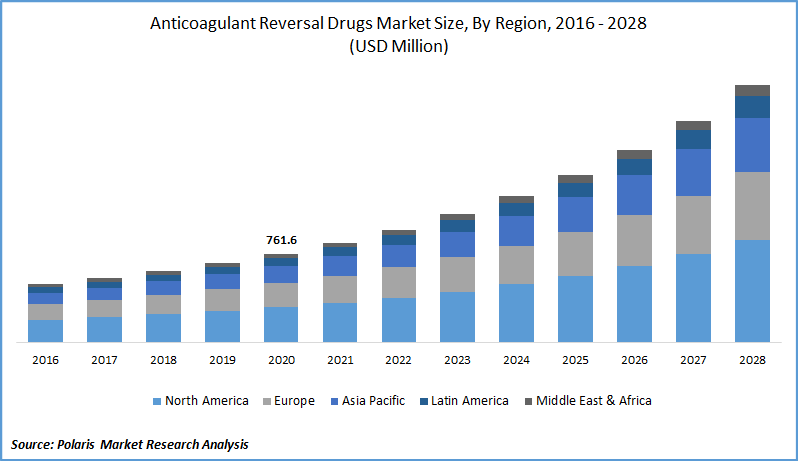 The anticoagulant reversal drugs market has witnessed new approvals and launches by the players in the marketplace. For instance, in May 2020, U.S. based regulatory agency FDA has approved “Andexxa”, developed by Portola Pharmaceuticals. It is the first factor Xa inhibitor antidote. It is indicated when individuals suffering from un-controlled life-threatening bleeding in association with apixaban and rivaroxaban drugs.

Moreover, the company also announced the sale of “Ondexxya” in the Europe region, in August 2020, as there is a large pool of patients in Europe receiving Factor Xa inhibitor therapy. Andexxa has also received orphan drug designation and breakthrough therapy designation by FDA. It is also being researched that bleeding can also be triggered with the use of blood thinners such as warfarin, aspirin, and heparin.

According to the data published by the National Center for Biotechnology Information (NCBI), it is being found that bleeding cases increase with the use of warfarin and are estimated at around 15% - 20% cases per year. This is increasing at the rate of 1% - 3% annually. Hence, the demand for anticoagulants is further increasing the market demand for the reversal agents in anticoagulant therapy.

The market is primarily segmented on the basis of product, distribution channel, and region.

Idarucizumab market segment for anticoagulant reversal drugs accounted for the largest revenue share in 2020 and likely to witness the highest growth rate over the study period. This high share is attributed to its high potential and legacy drug being effective. Moreover, the drug is in more demand due to its high efficacy and specificity. However, the Andexanet alfa segment is projected to witness the highest growth rate over the assessment period. The expected growth is due to the approval of the anticoagulant reversal drug in key geographic markets.

The hospital pharmacy market segment accounted for the largest revenue share of anticoagulant reversal drugs industry in 2020. This high share is attributed to the fact that hospitals are considered primary health centers all over the globe. Hospitals are better equipped with emergency un-controlled bleeding disorders, both financially and skill-wise. Both government and private hospital chains have collaborations with insurance agencies to better take care of the indication.

In 2020, the North America anticoagulant reversal drugs market accounted for over 35.0% share of the global market with the U.S. being the leading shareholder. Factors responsible for this include favorable reimbursement scenario in both U.S. and Canada, better-equipped specialty hospitals, and keen interest of market players in anticoagulant therapies.

Moreover, both countries have a skilled healthcare workforce and a huge pool of researchers involved in research & development activities, also complementing the region’s market growth for anticoagulant reversal drugs.