The global Aerial Refueling Systems Market size was valued at USD 533.9 million in 2019 and is anticipated to grow at a CAGR of 3.8% during the forecast period. Refueling systems provides extra-long run capabilities to an aircraft by refueling it during the in-flight time in the air which in turn increases the travelling range of an aircraft. Moreover, overall mission time and costs can also be reduced by using these systems.

Air-to-air refueling systems are rapidly gaining traction over military forces in the defense industry as most of the countries are trying to upgrade and strengthen their military forces by increasing their defense budgets and adopting new and advanced technologies. These systems are basically of two types i.e. hose (fuel supplier) & drogue (fuel ejector) and boom (fuel supplier) & receptacle (fuel accepter). 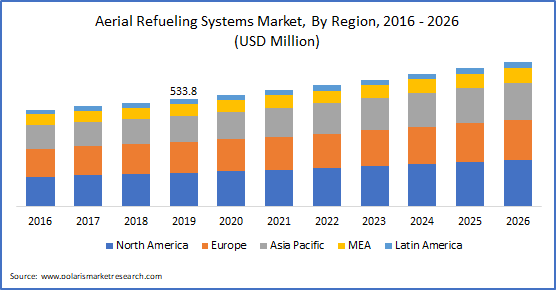 Factors such as requirement of highly trained professionals and stringent FAA regulations for aerial refueling systems manufacturing are some of the factors hindering the growth of market. For example, between two systems, boom and receptacle system needs even more detailed training and involves a higher risk. This is because the receptacle of the receiver aircraft is fixed in an aircraft and the boom has to be fixed in that receptacle in the mid-air.

This involves a thorough co-relation between the tanker aircraft and the receiver aircraft. In addition, hardware issues such as issues in boom system of Boeing’s new generation KC-46 tanker aircraft program is another factor impacting negatively on the market which leads to extra cost for maintenance and repair to the buyer. For instance, in 2018, the U.S. Air Force awarded a new US$ 55 million contract to fix the KC-46 Pegasus refueling boom.

The market is primarily segmented on the basis of Aircraft Type, By System Type, By Component, By End User, and By Region.

Among aircraft type, the market is segmented into combat & tanker aircraft, turboprop & helicopter, and UAV. According to Polaris Market Research, in 2019 combat & tanker aircraft was estimated to be the largest market for aerial refueling systems owing to increasing number of contracts for tanker aircraft and growing production of combat aircraft. For instance, in 2018, U.S. government awarded a contract worth US$ 9.2 billion for a full fleet of combat training aircraft under one of the largest U.S. military procurements. Furthermore, in September 2018, the U.S. Air Force signed a contract with Boeing worth US$ 2.9 billion for new 18 KC-46 tanker aircraft along with supporting equipment and wind air refueling pod kits for replacement of old models of tanker aircraft fleet. Moreover, In September 2019, Japan’s Ministry of Defense added 4 new units of KC-46 tanker aircraft as a part of in their previous contract in 2015 under the U.S. government Foreign Military Sales program.

UAV segment is expected to be the fastest growing aircraft type during the forecast period of 2020-2026. Increasing deployment of UAVs by different defense forces propelled by increased defense budget of different countries is expected to be one of the major factors which will aid in the growth for this segment during the near future. For instance, in 2018, the U.S. Navy awarded a contract to Boeing worth US$ 850 million to design and build the MQ-25A Stringy, the Navy’s first carrier-based unmanned refueling aircraft.

Among component, the market is segmented into hose, drogue, probe, boom, refueling pods, and others which comprises of receptacle, pumps, valves, etc. Boom was estimated to be the largest segment in 2019 owing to its highly new technology and high cost along with its increasing deployment in new generation aircraft such as Boeing’s KC-46 tanker aircraft.

Among end user, the market is segmented into OE and aftermarket. In 2019, OE segment was estimated to be most dominant and also it is expected to be the fastest growing segment during the forecast period as well owing to increasing production of tanker and refueling aircraft across the world.

North America was estimated to be the most dominant region in 2019 and is expected to be the largest region during the forecast period of 2020-2026 as well. The reason behind its dominance is the continuously rising fleet of tanker and refueling aircraft by the U.S. defense forces. The U.S. is growth engine of North America as well as global aerial refueling systems market. It accounted for a share of 90-95% in North American and 50-606% share in global market for refueling systems in 2019.

Asia Pacific is expected to be the fastest growing region during the forecast period for aerial refueling system globally. The growth of this region is fueled by increasing defense expenditure and higher adoption of new defense technologies in order to strengthen their defense forces due to rising tensions in the region. For instance, in 2018, China developed the region’s first aerial refueling tanker aircraft named H-6U, which is developed from H-6 bomber. It has a maximum takeoff weight of 75.8 tons and combat range of 5,600 km. This development is likely to help China to meet the country’s huge tanker aircraft requirement.

Vendors in this market are continuously trying to fulfill different industry’s requirements by collaborating with each other in order to provide a better service to the customers. For instance, in December 2018, Lockheed Martin and Airbus signed an agreement to jointly explore the opportunities to meet the industry’s demand for aerial refueling for U.S. defense customers. Companies such as Airbus SE, Cobham plc, Draken Internationnal, Eaton Corporation, GE Aviation, Marshall Aerospace & Defence Group, Parker Hannifin Corporation, Safran, and Zodiac Aerospace are some of the key players operating in this market.