The global drug of abuse testing services market was valued at USD 2.70 billion in 2020 and is expected to grow at a CAGR of 5.4% during the forecast period. Over the past few years, there has been an increase in the consumption of illicit drugs, alcohol, and other recreational chemicals particularly among the younger generation in the developed countries. 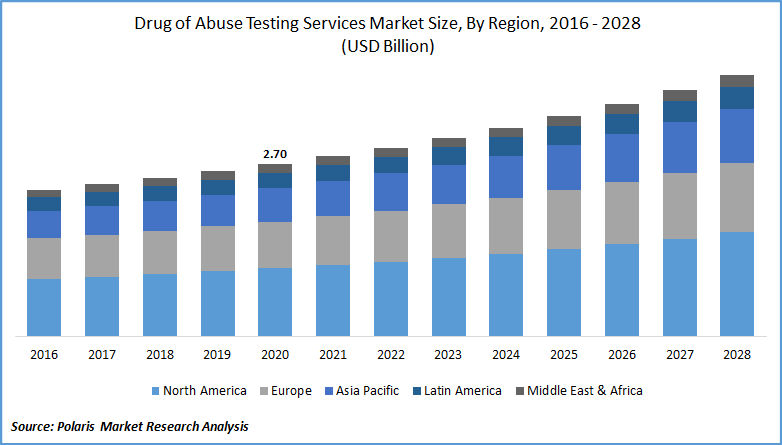 There is a rise in government monitoring to contain drug abuse also significantly driving the testing services market growth. According to the statistics published by the U.S.-based dedicated organization, United Nations Office on Drugs and Crime (UNODC), in 2019, approximately 35 million people across the globe are suffering from drug abuse disorders and are seeking testing and treatment services.

Moreover, based on the Federal Drug-Free Workplace program norms, a condition under which all federal employees must avoid consumption of any kind during office hours. It facilitates the certification of agencies free from the illicit use of drugs and initiates potential sources for potential toxicology testing services centers. SAMHSA center of drug abuse testing services also supervises certified labs to work under the mandated guidelines.

Adoption of such programs to test drug abuse in few sensitive institutions like law enforcement, public health and safety, and national security is expected to drive the testing services market. All testing services provided by both public and private entities should be in accordance with legal considerations. Such authorities have all power and legal mandate to decide the condition and situation under which testing services should be provided.

The market is primarily segmented on the basis of drug type, end-use, and region.

The cannabis abuse testing services market segment accounted for the largest revenue share in 2020. This high share is attributed to its highest consumption all over the world. As per the market statistics published by the Substance Abuse and Mental Health Services Administration, in 2018, a particular drug was commonly used in the U.S., and it is being estimated that over 43.5 million people are regular users.

However, the opioids abuse testing services market segment witness to register highest growth over the market study period. Such growth is due to the ongoing opioid crisis in western countries. According to the data stated by the National Center for Drug Abuse Statistics, in 2018, more than 2 million individuals in the U.S. are a victim of the opioid crisis.

The most prominent among these include heroin and prescription-based pain relievers. Moreover, key players in the market for drug of abuse testing services are introducing organic strategies to expand their capabilities for opioid abuse testing market.

Moreover, stronger government measures and the ongoing situation of COVID-19 in the region also favored the increase in consumption of illicit drugs. However, country-wise lockdowns reduced the market demand for workplace drug testing services, owing to the dormant market growth scenario.