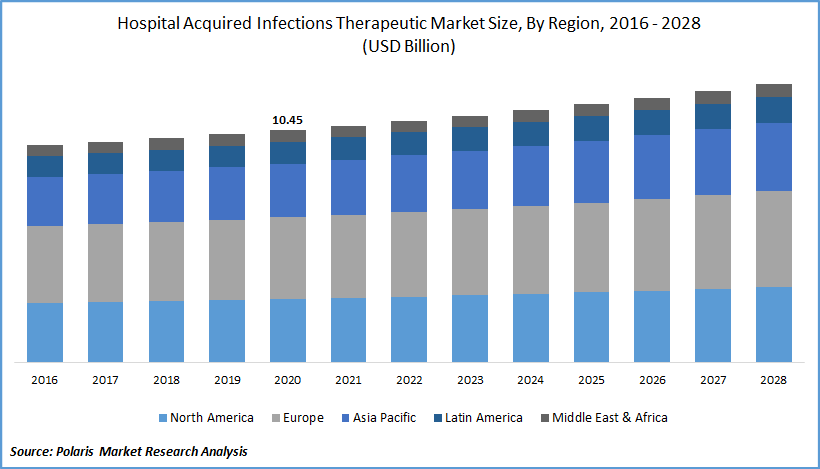 This decline is primarily due to dedicated concerted effort of strict regulatory norms and awareness among medical professionals. Developed countries like Germany, France, UK, and the U.S. have specialized medical facilities and can easily adhere to the strict policy regime. Thus, the decline in the demand for hospital acquired infections therapeutics in the developed economies with strict precautionary measures might hamper the therapeutic market growth.

The market is primarily segmented on the basis of drug class, by infection type, and geographic region.

The surgical site acquired illnesses market segment accounted for the largest revenue share of the therapeutic market in 2020. This high share is attributed to the rise in the number of surgeries, increasing hospital admissions, the subsequent onset of surgical site infections.

As per the statistics published by the CDC, about 27 million surgeries are performed in a year, out of which around 5% of hospitalized patients have developed surgical site infections. Each year around 300,000 patients in the country are affected by such infections. SSIs also increases the length of hospital stay from 7 to 11 days and are expected to cost around USD 3,000.

However, the urinary tract infections (UTIs) acquired in hospitals is projected to witness the highest growth rate over the assessment period. Growing patient awareness about the condition in emerging countries, and the rising cases of UTIs. UTIs are more common in women, around 40% of them experience a case of UTIs, at some time in their life. Moreover, the launch of new drugs to contain UTIs also favoring the segment’s market growth prospects for therapeutic.

Moreover, anti-bacterial therapeutics is regarded as the gold standard in treating hospital acquired infections. Multidrug-resistant micro-organisms should be treated with broad-spectrum antibiotics with minimal complications. Ideal anti-bacterial therapy should be short as 7 days, in comparison to 14 to 21 days.

In 2020, the Europe market accounted for over 30% of the global market for therapeutics. Regional factors responsible for such growth include the high prevalence of hospital acquired infections in the region, the strong pipeline of therapeutic drugs, and increased commercial activities in the industry. Moreover, the presence of industry giants in the region also supported the market growth.