The global high-end lighting market size was valued at USD 16.2 billion in 2018 and is expected to exhibit a CAGR of 5.7% over the forecast period. The global lighting market has been undergoing a rapid transformation over the past few years, with Light Emitting Diodes (LED) being one of the major source of light. The LED market has seen a continuous evolution with high-energy efficient improvements. Use of LEDs have also led to steep decline in cost per unit. Hence, LEDs have been successful in replacing the conventional lights such as halogen and incandescent bulbs. Some of the notable technological advancements in the high-end lighting market also includes sensor-enabled lights, color changing and connectivity. 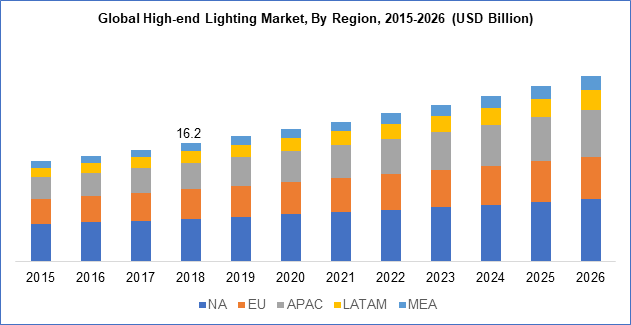 Know more about this report:request for sample pages

Increasing demand for smart and connected homes is anticipated to be one of the major reasons for the rise in demand for high end lightings, thus driving the market growth. The use of incandescent lights and high-intensity discharge lamps has been banned in many countries. Hence, their shares have been continuously decreasing. Increasing awareness about the benefits associated with the usage of LEDs have also driven the growth in demand for LED lights. These benefits include energy savings and reduced environmental pollution. Increasing Government support for the use of LED lights in order to save energy and also to decrease the carbon emissions has led to augment in demand for these high end lightings as well. In addition to these, the rise in per capita income among consumers has led to increased demand for interior designing, which in turn has led to augment in growth of high-end lighting market in the recent years. However, the introduction of green lights is anticipated to be a major challenge for the growth of high-end lighting market over the forecast period.

The market is primarily segmented on the basis of light source, application type, end-user and geographic region.

The fluorescent lights market size was highest in 2016. However, the LED lights have made a significant share owing to its advantages such as high efficiency and cost effectiveness. The ban on usage on HID lights have also benefitted the LED lights market, as customers have become more aware regarding the benefits associated with LED lights. In addition to this, it is estimated that the prices of LED lights would decrease in the near future, making it an attractive option for customers. This in turn, is also expected to boost the demand for LED lights, thus driving the growth in demand for high-end lightings.

Know more about this report:request for sample pages

Global market can be segmented into industrial, commercial, residential ad others based on end user. Currently, the residential segment holds the major share in global market. Commercial and industrial segments are expected to expand exponentially over the forecast period. The growing commercial sector coupled with rising demand for smart high end lights such as LEDs is expected to be one of the major factors driving the growth of this market. In addition, the need for energy savings in commercial and industrial sector is projected to contribute majorly in the growth of the market.

The global market was dominated by Asia Pacific in terms of market share in 2017. This region is anticipated to witness exponential growth over the forecast period. This is mainly attributed to the growth of commercial and industrial sector in Asia Pacific region. In addition to this, Asia Pacific is a hub for major players in this market. Toshiba Lighting is one of the regional players in LED lighting market in Japan.  Owing to the ban on usage of halogen bulbs in 2012, the penetration rate of LED lights was almost 77% in 2017 in this country. Favorable economic conditions and rapid technological advancements has also led to growth in demand for high-end lighting in Asia Pacific region. North America also contributed major share in the market in 2018. The demand for LED lighting in Middle East is also expected to rise rapidly in the near future.

Companies are continuously investing in R&D activities and are coming up with next generation high-end lighting. The key leading players in the market include OSRAM Licht AG, Philips Lighting Holding B.V., CREE Inc., General Electric Company, Toshiba Co., Digital Lumens, Inc., Holtkoetter, CMD Ltd., Helestra Leuchten GmbH, and less'n'more gmbh among others. One of the major opportunities for the manufactures in this market lies in cross industry expanding in order to create business. In March 2019, one of the major players in high end lightings – Cree inc, signed a definitive agreement with Ideal Industries Inc, to sell their lighting business which included LED lighting fixtures, lamps and corporate lighting solutions business for industrial, commercial and consumer applications. This was majorly done to create a more focus on the company’s strategy of making a powerhouse semiconductor company. In addition to this, in March 2019, Eaton – a broad power management company, announced its intention to spin out its LED centric lighting business into an independent company by the end of 2019.