The global smoke evacuation systems market was valued at USD 162.7 million in 2020 and is expected to grow at a CAGR of 7.5% during the forecast period. Key factors responsible for the market growth of the systems include product innovations, rising preference towards minimally invasive surgeries, product availability, growing target population, and acceptance of operating room guidelines and procedures for the concerned product in the healthcare facilities. 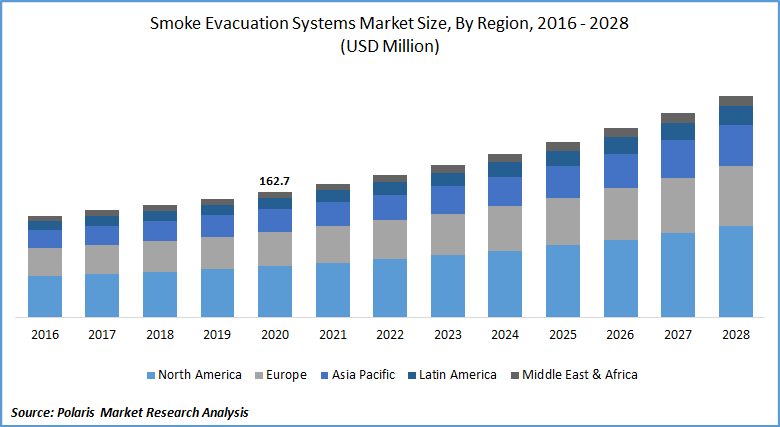 Moreover, the rising number of electro-surgery surgeries, medical tourism in emerging nations, and affordability among end-user are projected to drive the market forward for evacuation systems. As per the statistics published by the ASPS, in 2018, around 18 million individuals underwent surgical procedures in the U.S. alone, with a majority of procedures were minimally invasive.

Emerging countries like India, Thailand, Brazil, China, and Mexico are continuously improving the medical infrastructure to enable surgeries at lower costs, thereby medical tourism in such countries. Some of the important procedures include liposuction, abdominoplasty, rhytidectomy, and rhinoplasty.

These systems are effectively combined with electrosurgical generators are also known to generate a substantial amount of surgical smoke. This has streamlined the surgical workflow and is likely to drive market growth for evacuation systems.

The market is primarily segmented on the basis of product, application, end-use, and region.

The smoke evacuation systems market segment accounted for the largest revenue share, in 2020 and likely to witness the highest market growth over the study period. The ability of such systems in detecting smoke and channeling out smoke away from the occupied areas of the surgical facility. Moreover, the strong interest of companies, coupled with product launches also boosted the segment's growth prospects in smoke evacuation systems market.

However, the smoke evacuation filters segment is projected to witness the highest market growth rate over the forecast period. This is attributed to their wide applicability in vaporizing tissues, fluid, and blood as smoke, a by-product during laser and electro-surgeries.

The most common types of filters include in-line filters, charcoal filters, ULPA filters, and pre-filters. Among these, ULPA filters are considered highly effective and have the ability to filter out around 100% with 120 nm in size. Such high efficiency in containing airborne particles is likely to boost the segment’s market growth in smoke evacuation systems.

However, the medical aesthetic surgeries market segment is anticipated to register the fastest market growth rate over the study period. The rising number of aesthetic surgeries is primarily responsible for such growth. As per the statistics published by the American Society of Plastic Surgeons, in 2019, around 16.7 billion was spent on cosmetic surgeries in the U.S. alone.

In 2020, the North America region accounted for over 35% of the global market for smoke evacuation systems with the U.S. being the leading shareholder. Rising hospital admissions for surgeries in the well-developed medical infrastructure, coupled with high spending power also increases the installation rate of smoke evacuation systems.

The market growth in the region can also be attributed to the rise in aesthetic surgeries such as BOTOX wherein, laser treatment is being used, where a lot of smoke plumes were generated, which emphasizes the need for smoke evacuation systems during surgeries in the healthcare facility.