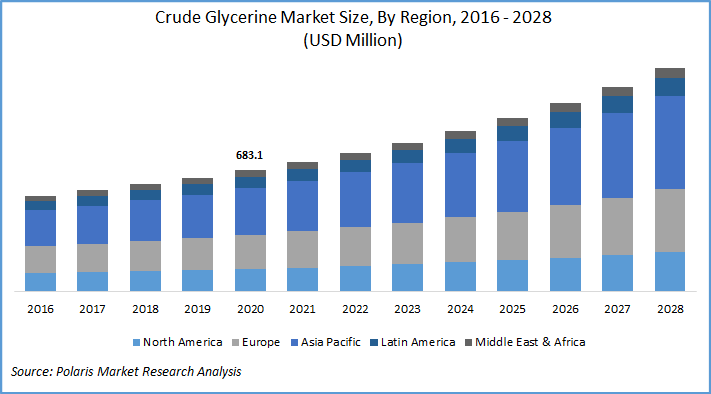 Growth Drivers
Crude glycerine is mostly used to convert refined glycerine with enhanced purity. Refine glycerine is used in varied applications such as food and beverage, personal care, automotive, pharmaceutical, and healthcare, and chemical intermediate among others. Crude glycerine is also used as a solvent for enhancing enzymatic hydrolysis of lignocellulosic biomass during atmospheric autocatalytic organosolv pretreatment. It also finds application as a green solvent for organic reactions.

Growing environmental concerns and increasing greenhouse emissions have increased the use of biodiesel. Use of biodiesel as an alternate source of energy results in reduced carbon dioxide, sulfur and nitrogen oxides, and carbon monoxide among others. Increased use of biodiesel has resulted in market growth in the production of crude glycerine.

Rising industrialization, growing urbanization, and increasing demand from wastewater treatment drive the growth of the crude glycerine market. Crude glycerine is used as a source of external carbon for wastewater treatment for increased efficiency in the removal of nitrogen forms. Growing market demand from developing economies, technological advancement, and significant investments in research and development by leading players fuels the growth of the crude glycerine market.

The market is primarily segmented on the basis of glycerol content, application, region.

On the basis of glycerol content, the market is segmented into less than 80%, 80%-90%, and more than 90%. Crude glycerol with varied content is used for diverse applications. Growing applications and technological innovation are encouraging market players to use crude glycerol for applications such as animal feed and biogas production.

The application market segment has been divided into is animal feed, wastewater treatment, biogas, oleochemistry, and others. Crude glycerol is increasingly being used for biogas production. Some factors driving the market growth of this market segment include cost-effectiveness, simple operational conditions, and improved production.

The market demand for crude glycerine is expected to increase from Asia Pacific during the forecast period. Rising industrialization, the expansion of leading players in the region, and technological advancements are some factors attributed to the market growth of this region. The rising market demand for biogas production, increasing use in animal feed, and increasing applications further drive the market growth in this region.