The global methanol market size was estimated to be USD 38.9 billion in 2018 and is forecasted to grow at a CAGR of 9.8 % from 2019 to 2026. Methanol, a common name for methyl alcohol is a commodity chemical used in numerous applications directly or further modified chemically to manufacture a variety of other chemical compounds. Natural gas and coal are the major feedstock for the production of methanol.

Global demand of methanol is mainly driven by the production of other basic chemicals which are further used in end-use products and fuels. Methanol is widely used in production of other chemical compounds such as formaldehyde, acetic acid, MTO/MTP, MMA, and methylamines. These derivatives of methanol are further used in manufacturing products for large industries such as electronics, plastics, construction material, and automotive. 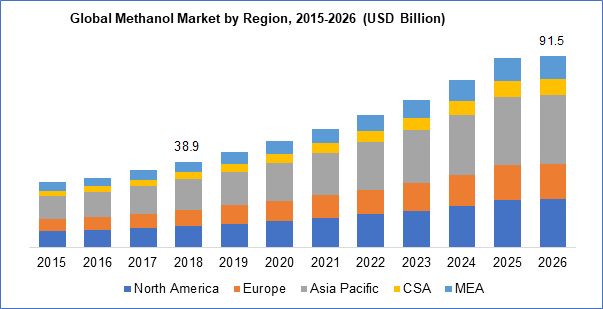 Some of the new applications for methanol that were introduced in the industry later, include fuel blending, dimethyl ether production, and light olefins. Historically fuel applications of methanol held extremely minor share of the market, that increased in last five years due to expansion of energy market. Methanol, when produced from renewable feedstocks is a type of biofuel and is blended with petroleum-based fuels in transportation sector to reduce carbon emissions in the environment.

The overall methanol economics is mainly dependent upon the costs of the feedstock which constitutes approximately 90% of the total cost. Natural gas is the major feedstock for the methanol production and represents around 85% of total installed capacity, where initially the production existed in North America and Europe. The industry later witnessed a sharp rise after witnessing massive demand from China on account of its rich coal reserves, that is another significant feedstock for methanol.

Methanol demand was severely affected by the slump in prices of crude oil in 2014, wherein the overall market grew at an average rate of 6% yearly in the past five years.  Among the newer applications, methanol demand in fuel has witnessed slow growth currently and other innovative applications such as MTP (methanol-to-propylene) and MTO (methanol-to-olefins) have witnessed rapid growth.

Other end-uses for methanol include methylamines, chloro-methanes, MTO/MTP, solvents, DMT, acetic acid, MTBE, MMA, gasoline blending, biodiesel, and dimethyl ether. MTO/MTP is one of the latest end-use for these products and is anticipated to witness moderate growth over the forecast period.

Asia Pacific is the largest consumer for methanol where Northeast Asia constitutes major share of the regional market. China alone has more than 200 distinct production locations in China. New plant additions in Northeast Asia, including MTO/MTP plants has significantly driven this region’s market.

China is the most significant and largest contributor to the growth of global methanol production. The considerable development of worldwide methanol production has resulted in immense opportunities for China, wherein the country is already focusing on achieving chemical self-sufficiency.

North America is the second largest regional market for methanol. The demand of methanol in North America is primarily driven by vast and advanced construction industry that utilizes formaldehyde as a major product.