The global reclaimed rubber market size was estimated at USD 2.39 billion in 2018 and is estimated to increase at a CAGR of 12.03 % from 2019 to 2026. The product is a cured rubber, produced via a thermochemical process and is less expensive than pure rubber. It is often formed by shortening of the polymer chain. These products are is extensively used in many end-use applications such as automobiles, belts & hoses, aircraft, adhesives, retreading, and footwear.

Recycling of rubber to improve sustainability factors in the automotive tires industry has contributed significantly to the growth of the industry globally. This lesser expensive raw material for tires is largely preferred by manufacturers on account of its reduced thermal plasticity & lower power consumption rate. 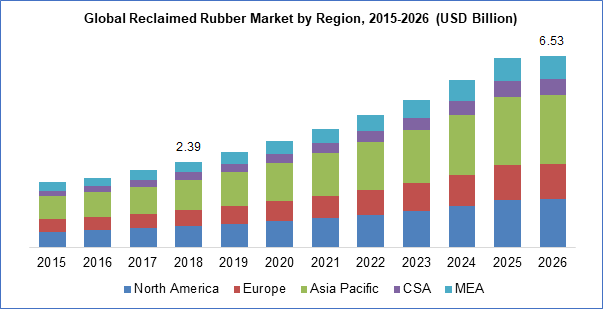 Such properties make it easier to break down during the processing stage as compared to the synthetic counterpart. Greater availability of disposed or waste tires and lesser reclaim rubber cost has further contributed to industry growth in recent years.

Rapidly growing automobile industry is expected to strengthen the reclaimed rubber demand due to its resistance to ultraviolet rays and heat radiations from sun. Its consumption has increasingly gained significance in the production of tires, wheels, and belt & hoses with coupled with surging demand of other non-automobile parts.

The reclaim rubber industry is mainly driven by the replacement factors of the other rubber types. It is used as an alternative to synthetic and natural rubber. Reclaim rubber from a scrap of tread peelings, whole tires, and natural rubber tubes are used for both non-tire and tire applications in automobile and other industries. Recycling or reclaiming is a commonly known method allowing use of waste rubber and fractional recycling. Thermo-oxidative or destruction of turgid vulcanized rubber is the most common principle method among the existing ones.

The global reclaimed rubber market is segmented on the basis of products and application. Based on the type of products it is segmented into butyl reclaim, whole tire reclaims (WTR), drab & colored, EPDM, and others. WTR is anticipated to be the largest product segment for the market. EPDM is also expected to witness considerable growth on account of its properties such as improved speed extrusion and high ozone resistance.

Based on the application segment, automotive & aircraft tires are expected to be the largest segment. Increase in natural rubber prices and technical developments in the rubber blends has strengthened the consumption of reclaimed rubber in the tire and non-tire automobile applications.

Asia Pacific has emerged as the dominant regional sector in 2017. Rapid development in the aerospace and automotive industry especially from China, India, and Thailand has influenced the demand of reclaimed rubber in the region positively. Shift in the production bases of major recyclers in the emerging nations of Asia Pacific has also significantly contributed to the growth of this region.

North America industry is also expected to witness considerable growth due to aircraft & automobile tires and increase in small wide body passenger airplanes. Europe is also a significant market for reclaimed rubber due to less energy consumption from automobile components and sustainability.