The global styrene butadiene rubber (SBR) market consumption volume was 2,659.6 kilo tons in 2017 and is estimated to grow at a CAGR of 4.4% from 2018 to 2026. SBR is a synthetic polymer and among the largest-volume produced rubber globally. This product is a result of co polymerization of styrene and butadiene in a specific ratio.

SBR is produced in two major grades that include, emulsion SBR (ESBR) and Solution SBR (SSBR). Emulsion SBR accounts for a higher share of market but is losing grounds to SSBR, as the later is better suited to cater to the stringent specifications of high-performance tires. However, SBR of the both grades are highly resistant to abrasion and heat aging but has lower hot tear strengths as compared to some of the substitutes. 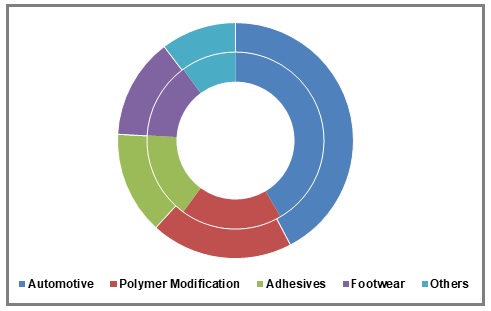 The global Styrene Butadiene Rubber (SBR) market is primarily driven by it high consumption in the automotive industry, where tires are the dominant segment. Real GDP growth hovering in some of the Asia Pacific countries, steady growth of the Styrene Butadiene Rubber (SBR) market in the United States, and the economic developments in the euro zone to support manufacturers’ earnings are some of the crucial factors that have supported the growth of global auto industry and have led to higher consumption of SBR.

Increasing urbanization in the developing countries and rising personal disposable income of the consumers in the middle-income nations have supported the growth of automobile industry. Changing consumer lifestyle in tandem with the increased spending on modern commodity products have also enhanced the consumption of SBR in other markets such as footwear, extruded rubber goods, industrial hoses, non-tire automotive applications, and other consumer goods.

Emulsion SBR accounts for over 70% of the total world capacity due to its superior properties. However, the product is losing market share to SSBR, as the later is highly efficient to meet the specific requirements of the high-performance tires. ESBR is expected to witness a decrease in market share in the near future as most of the new SBR capacity additions around the globe are based on the solution SBR process.

On the basis of applications, the Styrene Butadiene Rubber (SBR) market is segmented into automotive, footwear, polymer modification, and adhesives. Tires in the automotive segment have highest consumption of SBR globally. Some other applications for SBR include industrial hoses, consumer products, non-tire automotive applications, conveyor belts, and extruded & molded rubber goods.

Asia Pacific is the largest regional player for the global Styrene Butadiene Rubber (SBR) market. Though there was a slight decline witnessed in the overall market in the past five years on account of decline of the largest consumer, China. The Northeast Asia, especially Taiwan and Indian subcontinent witnessed the most significant growth during this period.

In the current scenario for APAC, several SBR plants that were shut down or were running at lower costs, were anticipated to ramp up the operating rates and resume operations from the second quarter of 2018. Taiwan, South Korea, and China are likely to build up their inventories during the last quarter.

The highest average annual growth rates are delineated towards some of the smaller markets of the world such as CIS & Baltic States and the Middle East. Styrene Butadiene Rubber (SBR) market is expected to have limited growth in the mature markets including Japan, Canada, and the Western Europe.

The global styrene butadiene rubber (SBR) market comprises of large multinational and domestic companies. The industry is fragmented and highly competitive in tandem with the high degree of integration across the manufacturing and distribution stage.