The global ultracapacitors market was valued at USD 1,402.8 million in 2017 and is anticipated to grow at a CAGR of 21.5% during the forecast period. 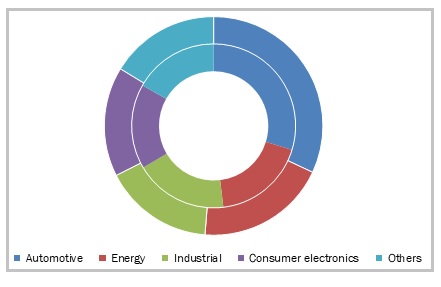 Other factors driving the ultracapacitors market include increasing electrification in vehicles, growing application in hybrid powertrain systems and regenerative braking, and rising adoption of electrical smart meters. The increasing awareness regarding use of energy efficient energy storage devices, and growing adoption of electric vehicles is expected to support market growth during the forecast period. However, high production costs hamper the growth of the market.

The global ultracapacitors market is segmented on the basis of power, end-user, and region. Based on power, the market is segmented into Less than 50 Volts, 50 Volts to 100 Volts, and Above 100 Volts. The end-user segment is divided into Automotive, Energy, Industrial, Consumer Electronics, and others. The automotive segment is expected to grow at the highest growth during the forecast period owing to increasing modernization of automotive, and growing adoption of electric vehicles.

Based on region, the ultracapacitors market is segmented across North America, Europe, Asia-Pacific, Latin America, and MEA. North America is further segmented into U.S., Canada, and Mexico. Europe is divided into Germany, UK, Italy, France, and Rest of Europe. Asia-Pacific is bifurcated into China, India, Japan, and Rest of Asia-Pacific. Asia-Pacific is expected to grow at the highest rate during the forecast period owing to growing demand for consumer electronics, and increasing adoption of electric vehicles.

The leading players in the ultracapacitors market include Maxwell Technologies, Skeleton Technologies, Nippon Chemi-Con Corporation, CAP-XX, Supreme Power Solutions Co. Ltd, VINATech Co.,Ltd., NEC-TOKIN, LS Mtron, Nesscap, and Ioxus among others. The leading players in the ultracapacitors market are introducing new innovative products in the market to cater to the growing consumer demands. Global players are entering new markets in developing regions to expand their customer base and strengthen market presence.