The global myasthenia gravis disease market was valued at USD 1,012.2 million in 2017 and is anticipated to grow at a CAGR of 10.8% during the forecast period. Myasthenia gravis disease is a neuromuscular ailment that causes the weakness of skeletal muscles, that are used for body movement. MG Disease is generally caused by an autoimmune disease when communication between muscles and nerve cells becomes impaired. Such impairment prevents crucial muscle contractions, resulting in muscle weakness. The symptoms of MG Disease include facial paralysis, difficulty breathing due to muscle weakness, difficulty swallowing or chewing, drooping of eyelids, and trouble in walking. If not treated, symptoms may increase over the time. According to the Myasthenia Gravis Foundation of America, MG is relatively rare condition that affects approximately 14 to 20 out of every 100,000 people in the United States. Moreover, according to the National Institutes of Health (NIH), MG typically occurs in people over the age of 40 where Women are more likely to be diagnosed as younger adults. There is no exact cure for the MG disease. However, through appropriate diagnosis and medication treatment, the disease can be controlled over the time.

The global Myasthenia Gravis Disease market is majorly driven by the factor such as high incidences of neuromuscular disorders. Moreover, increasing number of clinical facilities across the region and rising consciousness about the treatment are other factors driving the market growth. However, the unfamiliarity with early symptoms as well as signs and high cost associated with the treatment are factors hampering the market growth. 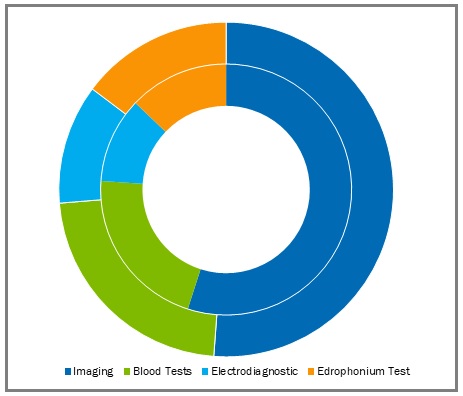 The global Myasthenia Gravis Disease Market is segmented on the basis of diagnosis, treatment, end-user, and region. On the basis of diagnosis, the market is categorized into Imaging, Blood Tests, Electrodiagnostic, and Edrophonium Test. The imaging segment is further bifurcated into X-ray, Computed Tomography (CT), Magnetic Resonance Imaging (MRI), and others. On the basis of treatment, the market is segmented into Medication, Surgery, and HSCT. The end-user is further segmented in to Hospitals, Clinics, and Academic Research Institutes.

The major factors accounted for the high MG Disease market growth includes high occurrence of disease such in North America. For instance, MG disease affects approximately 14 to 20 out of every 100,000 people in the United States. Moreover, increasing government initiatives and funding for the disease treatment, rising number of drug manufacturers and, growing awareness about the long-term effects of muscle dystrophy in the region are other factors for the market growth in North America.