The global hydrogen fuel cell vehicle (HFCV) market was valued at USD 2.56 billion in 2019 and is expected to exhibit a CAGR of 41.2% over the forecast period. In contrast with the cars that uses petrol or diesel, or gasoline, a hydrogen fuel cell vehicle combines hydrogen with oxygen to generate electricity. There are several factors that drive the market growth such as the increasing development of varied technologies in the automotive sector that creates growth opportunities for the market. HFCV is a motive-based car using hydrogen as its onboard fuel. Hybrid vehicle power plants transform chemical energy into mechanical energy either by burning hydrogen inside an internal combustion engine or by responding to electric motors using hydrogen with oxygen in a fuel cell. Because of the development of infrastructure to generate hydrogen, the market is anticipated to experience significant growth.

In addition, the existence of national tax rebates, rising number of OEMs and availability of hydrogen refueling stations (HRS) are driving market growth. However, it is anticipated that high initial investment in infrastructure will restrict the market growth. In addition, government investments coupled with incentives to assist drive the demand for HFC vehicles are expected to provide opportunities for the global HFCV industry growth. Despite, the global market is receiving a favorable customer reaction; the market is also likely to face some restrictions in its growth. The absence of infrastructure to promote the implementation of hydrogen fuel cell vehicles drives initial investments, leading prospective market players to imagine their choices in second place. Hydrogen fuel cell vehicles are expensive which is expected to hamper the market growth. 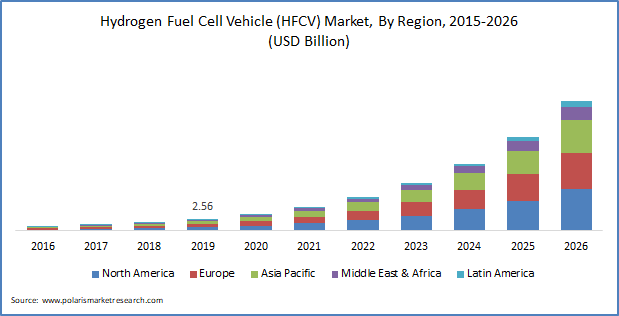 As of 2019, three hydrogen cars are publicly available which include the Hyundai ix35 FCEV, the Toyota Mirai, and the Honda Clarity. Many other companies are working for the development of hydrogen cars. Hydrogen is pumped as a gas into the fuel cell. On ignition, it combines with the oxygen for the production of only water and heat with no emission of toxic. However, hydrogen is rarely found in its purest form, it is mostly bonded to other molecules such as water. it takes energy for splitting the bond, which is difficult to balance out.

Hydrogen requires just a 4% mixture with air to burn, so it is easy to detonate and it burns quickly. One of the concerns during storage is leakage. And it takes a lot of energy for compressing into an energy density that is appropriate for vehicle refueling. The vehicles running on hydrogen are much more expensive than those running on gasoline or alcohol.

The market is primarily segmented on the basis of technology, vehicle type, and geographic region.

This is a major enhancement over internal combustion engines, nuclear power plants, and coal-fired energy plants, all producing harmful by-products. By directly converting chemical potential energy into electrical energy, fuel cells prevent the "thermal bottleneck" and are therefore inherently more effective than combustion motors, which first have to transform chemical energy into heat, then into mechanical work.

The passenger vehicles segment is expected to dominate the market during the forecast period. A new trend witnessed among automotive manufacturers is raising R&D activities to achieve fuel efficiency, focusing on advantageous manufacturing places and short-distance supply to decrease expenses. It is anticipated that the market for hydrogen fuel cell vehicles will propel during the forecast period owing to significant driving factors such as the increased focus on high-quality products, altering consumer lifestyles, and increasing the power of expenditure. In order to increase the effectiveness in the automotive sector, automotive businesses including passenger car manufacturers are constantly seeking to emphasize more on innovation for their product offering.

North America accounted for the largest market share in the global hydrogen fuel cell vehicle market and is expected to continue its dominance in the market over the forecast period. In the U.S., HFCV incentives and hydrogen infrastructure continue to experience unparalleled leadership. Furthermore, countries including Japan, United Kingdom, Germany, and California have announced plans to help finance hydrogen fuelling stations in the U.S. Asia Pacific is expected to propel with the fastest growth rate in the global market due to high demand and highly developed automotive manufacturing capabilities in the region, particularly in China. However, in countries such as Japan and South Korea, the growth of automotive manufacturing sectors continued to strongly promote fuel cell technology.

The prominent participants of the global HFCV market include The Hyundai Motor Company, Toyota Motor Sales, USA, Inc., Daimler AG (Mercedes-Benz), BMW, General Motors Company, Groupe Renault, Mazda Motor Corporation, Hydrogenics, Kia Motor Corporation, and Tata Motors Limited. An increasing amount of financing obligations for the marketing and development of refueling infrastructure will be key considerations for the growth of these players in the coming years.